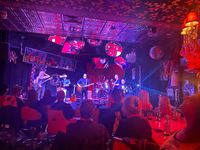 FREE EVENT: Play songs from their FRAZZ Album at the Bayview Hotel Sydney

“When I say this new album from WAYNE GILLESPIE & FAMOUS BLUE RAINCOAT is all over the place I mean it as a total compliment, such is the diversity of songs, styles, and sounds on it. That’s why they call it FRAZZ – think Folk, Rock, and Jazz. . . it’s FRAZZ! I love it and hope you find time to spend some time with it and embrace the songs here as I have.” – Stuart Coupe

Gillespie cut his teeth playing London Folk Clubs and Busking in Paris Metros, making the finals of the NZ Music awards in 1984 & 1988 before relocating to Sydney. Gillespie has performed with the likes of Suzanne Vega, Chris Whitley, Stan Ridgeway, Ed Keupper, Margaret Urlich, and Dave Dobbyn.

These songs off the album FRAZZ are a written collaboration with Drummer/Engineer Rob Grosser who has worked with musicians such as; Jimmy Barnes, Bob Daisley, Jon Lord, and Steve Morse. So the album FRAZZ concoction of Alt/Folk/Rock/Jazz – Tracks with traces of Rock-edge, spiced with cheeky surrealism, Jazz juices, Folk reverence, African flavours, Hypnotic Grooves, and Dark Tales. FIND OUT MORE: